Probably the most sought-after island in the Philippines, Onok Island is a tiny piece of paradise in the south of Palawan that features expansive shallow clear waters, giant clams, a sand bar appearing during low tide, wild sea turtles, a coral reef, and a stilt over-water walkway.

Are you for Onok Island?

It’s not easy to experience Onok Island though. One must have a concrete desire to make it, a brave heart to dismiss the (mythical) threats, a willingness to embrace the (uncomfortable) island life, some time to spare for the journey, and money, of course. If you have a problem with any of the mentioned factors, then maybe Onok Island is not for you. Onok Island is not for those who are overcome by fear, nor those who can’t afford to take at least 5 days away from the convenience of the city. On the contrary, those who are up for an adventure are rewarded by Onok’s proverbial beauty.

But before anything else, lets get this one straight. Many blogs write “Onuk” while some write “Onok.” So which one is correct? We learned through the owner’s daughter that the spelling should really be Onok. So if you’re writing anything about this island, use the correct spelling, okay?!

Much about Onok Island is learned by talking with locals of Balabac, the municipality that covers Onok, especially the caretaker of Onok Island himself.

Its discovery traces back in the 80’s when a mapping officer named Roughton discovered it and named it after himself, Roughton Island. Old topographical maps show Roughton Island instead of Onok Island. Eventually, an official of Balabac bought the island and held ownership until 2018, before it was acquired by another official.

Around 5 years ago, one didn’t have to pay any entrance fee to set foot on Onok Island. However, one of the boatmen who offers tours to Balabac popularly named Kap Andong charged his guests Php 5,000 per person whenever he brought people to Onok, which the owner eventually found out through a blog that was published by a previous visitor. This caused the owner to ban Kap Andong (of Balabac Safari The Best) from bringing guests to Onok Island. This is why he doesn’t offer Onok Island; and it’s a story that you will only hear about when you are already frustrated for not being able to see Onok while you are in Balabac!

The owner also started to impose a Php 1,500/person entrance fee for a daytrip, no food nor transport included. The management used to allow overnight stay for Php 3,500/person, until recently when they prohibited staying for the night.

Because of the private ownership of the island, one needs prior permission before going to this island, which a tour operator does for its guest. If you are visiting Balabac and don’t want to miss Onok (why would you?), make sure you have the right contacts.

Our team has healthy connections with the caretaker and owner of Onok Island, that is why we can certainly bring guests there, unless it is temporarily closed for maintenance.

Our Balabac Private and Group Tours allow you to have a guaranteed and hassle-free visit to this paradise. Our van transport will pick you up from your lodge in Puerto Princesa. After 6 hours, you will reach the south port where a private boat will pick you up so you can start the island hopping to other islands in Balabac. Depending on your stay in Balabac (4 or 3 days), you will visit Onok the next day or the other.

On the contrary, other tour operators will have you commute from Puerto Princesa to Rio Tuba Port, spend the night there so you can ride the passenger ferry to Mainland Balabac, where you will sleep in the town. The next day serves as your chance to visit Onok. This wastes 2 days just for travel time to Balabac.

If you are worried about safety in Balabac because you have heard about some threats such as crocodiles, malaria, and bandits, now is the time to have some peace of mind. None of this exists in Onok. The only threat is the waves that you will face since it is quite far. But so far, we have experienced no danger from all the tours we have conducted there.

You may read further about how Balabac is safe for tourists here. 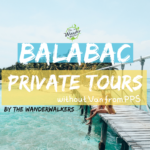 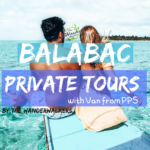 Upcoming Group Tours You Can Join:

For those asking, yes Balabac has reopened this mo

With whom do you picture yourself here? @Tag them!

It's indeed HAPPY 2022 because we are now official

Tour price and details are now uploaded in our web

Stay tuned, you beaches!!! The much awaited tour p

We will release our 2022 Joiner Tour Schedules thi

It's always a fine day when you're on a white sand

Happy days by the beach ❤️

Beach days are the best days! Who would you love t

This season, what we need is some Vitamin Sea. Tag

So good to be back in Balabac ❤️ Check the lat